I’m trying to export multiple art boards which has the same header and footer and was aiming for a clean css-file, with the same classes for header and footer (as they use the same master component), using “External stylesheet” and “Style via classes”. But the css-file contains a lot of style-copies.

Renaming the instances to the same component name, instead of “Component 51 - 9” etc, create the same styles, to some extent. Some images are fine, like “Image_1.png”, but some adds unique names, like “Image_1_gv.png”.

What’s the best approach to this?

Can you post an example XD project that I can see what you’re talking about?

The issue, I think, is that these style declarations may be declared inside the media queries. If the media query is turned off then the single and only class declaration is also not applied.

It maybe best for Web Export to place any component class declarations outside of the media queries (if media queries are used). If this sounds correct this would be a feature request.

In the mean time I’ll see if there’s a best practice. Components should have their component name in the class field by default.

The component class style declaration could be placed in a code block or in the stylesheet template.

As for the images that would probably be a feature request too.

HI,
I tried a minimalistic version of my project, with the same result.
I have it in a ZIP, along with the exported result, but are not allowed to upload it as a new user…

PS.
Do you know about any tool/plugin that can export the whole internals, for a project, as JSON?
Would be neat to track down differences in objects.

After digging some more into my fresh minimalistic version, I figured out that the group & path (exported as png) inside it, had the same name. Changing name or exporting the group as png, solved the problem.

I still have a problem my big project, even as i stripe it down to a minimal state.

I’m uploading the XD-file and the result here , my export settings are in Web ExportSettings.PNG.

Do you know about any tool/plugin that can export the whole internals, for a project, as JSON?
Would be neat to track down differences in objects.

XD projects are ZIP files. You can uncompress them and view the document as a JSON.

The master component has a solid green filled diamond in the upper left corner and duplicates have a solid white fill.

If a component instance is modified it has a filled ellipse in the center of the diamond.

I would give the master component a specific name. This name will propagate to any component instances and then that component name will be added as the first class in the code. 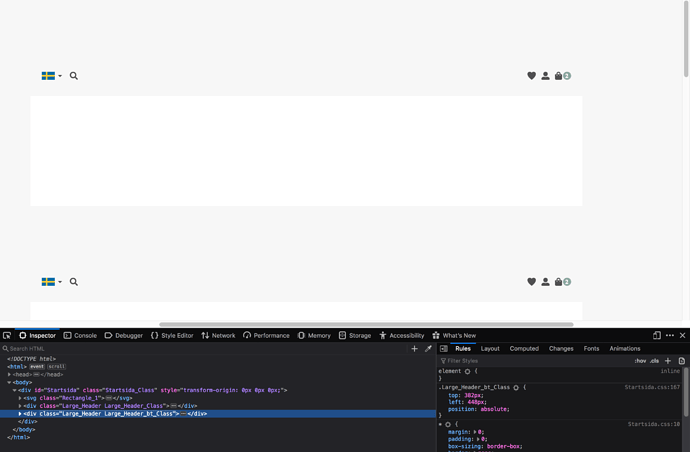 The class is reduced down to:

First component instance on the artboard (for comparison):

You can then rely on the component name being in every duplicate instance and that class and properties to it’s own style declaration. Theoretically the software could figure this out but that would be a feature request.

Thanks for the input, I will communicate with the designer-side to tide up the project.
I’m just on the export-side of the project, but I’m learning, fast;-)
/Hans